Founded in 1893, the Mancos Times published all the news fit to print. The advertisements alone reveal much about the goods, services, and entertainment available to the burgeoning community. The Tribune, of an opposing political persuasion, hit the streets in 1902. In 1904, E.J. and Ira Freeman consolidated the two papers under one masthead. The newspaper not only reported the daily events, it promoted mining, agriculture, and tourism which attracted investments, new residents, and visitors. 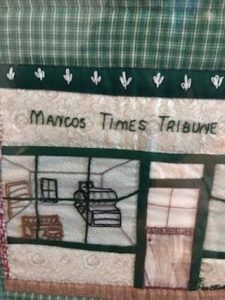 The Woolgrowers by Karen Simmons Patcheck

Sheep as well as cattle were an important part of the early economy. Stockyards were built near the railroad station. Many farm families moved with their livestock to the mountains for the summer, grazing their sheep, cattle, and pigs in the high pastures, making dairy products, and harvesting berries. Guymon’s cabin and Lucy Hall Park are some of the summer sites of these farmers. 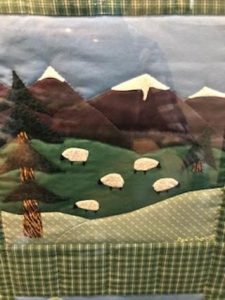